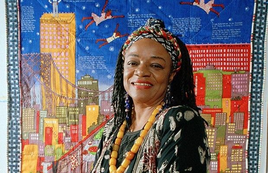 Born Faith Will Jones on October 8, 1930, Faith Ringgold is an American artist activist, author and cultural icon who is celebrated for creating innovative, narrative quilts that communicate her political beliefs. Faith Ringgold has written and illustrated numerous children’s books and received many awards.  Her career has been prolific and diverse. The painted narrative quilts grew out of her desire to condemn racism and discrimination.  As noted by the artist, “Quilts became a means of getting my own story out there.” Faith Ringgold created African-style masks, painted political posters and actively sought the racial integration of the New York art world. At the age of 90, Faith Ringgold continues to create artwork and fight in the struggles to resolve the current issues in today’s unsettling climate. 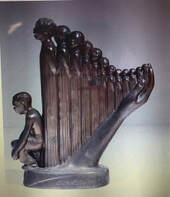 "The Harp"~ 1939 Inspired by James Weldon Johnson's 1900 poem-themed Lift Every Voice and Sing.  The Harp symbolized the musical contributions of African Americans.

Augusta Savage was a successful sculptor, educator, activist and lobbyist for the arts. In 1923, Augusta applied for a scholarship to study abroad but was rejected because of her race. She went to the local newspaper and spoke out against the committee's discriminatory selection process. Although a courageous move, the committee did not change their decision of allowing blacks in their program. In 1932, Augusta Savage became the first African American woman to open her own art studio in Harlem.  In 1939, Augusta was commissioned to create the Harp, a 16 - foot musical instrument created for the 1939 New York World's Fair.

"Forever Free" (Morning of Liberty) 1867-68, marble statue
depicting two slaves who have been freed due to the Emancipation Proclamation and the Union victory of the Civil War.

Edmonia Lewis was the first sculptor of African American and Native American descent to achieve international acclaim and recognition. In 1859, she attended Oberlin College in Ohio, one of the first schools to accept black students. She moved to Rome to escape racial tensions as a black artist and studied stonework.  Edmonia created all her own work; out of fear that if she didn’t, her work would not be accepted as original. Her sculpted works depict her Native American heritage and the oppression of black people. Edmonia Lewis is recognized as one of 100 most important African Americans in History. 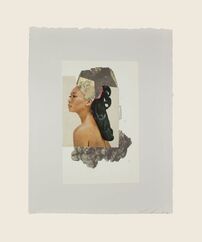 Lorna Simpson~ Photographer and Multimedia Artist b~1960 to present

Lorna Simpson is best known for creating powerful artwork that combines photographs with words (photo texts) and incorporating video installation, paintings, collages and film into her works. Most of Lorna Simpson’s art depicts African -American women dealing with issues of racial stereotypes, gender, culture and history. Her work has been exhibited in museums and art galleries around the country.  Lorna Simpson is the recipient of The Whitney Museum of American Art and the J. Paul Getty Medal.


“In Lorna Simpson’s collages … black women’s heads of hair are galaxies unto themselves, solar systems, moonscapes, volcanic interiors … It is sinuous and cloudy and fully alive.”


Pat Ward Williams, is an acclaimed artist and photographer. Her work is politically charged and focuses on race relations, gender, history and violence in the lives of African Americans in the U.S. Williams works in a variety of media, often combining photographs, objects, and text. U.S. In her photographs, she uses mixed media, often creating collages weaved with text. The artist’s work is not only remarkable, but it also challenges its viewers to confront racial issues in society today. 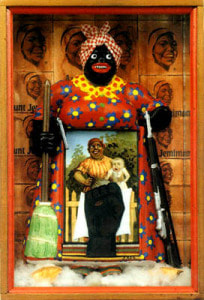 The Liberation of Aunt Jemima, 1972
​
Betye Saar is best known for creating art assemblages evoking strong social and political symbolism that challenge racism,sexism, stereotypes and myths held about black women.  Her artwork is aimed to empower the black women and transform the negative narrative that remains entrenched in our country.  The artist is credited for launching the Black Women’s movement. At age 94, Betye Saar continues to be an activist for political and social change.

Artist statement, “The reasoning behind this decision is to empower black women and not let the narrative of a white person determine how black women should view herself."
Inspirational Quotes by black female artists /activists~


Maya Angelou~ “The more you know your history , the more liberated you are.”


Katherine Dunham~ “My job is to create a useful legacy.”


Elizabeth Catlett~ “Art is only important to the extent that it aids in the liberation of our people.”


Harriet Tubman~ “Remember, you have within you the strength, the patience, and the passion to reach for the stars to change the world.”


Howardena Pindell~ "I want as many people as possible to know that I am black and that, no matter what, you don't give up." 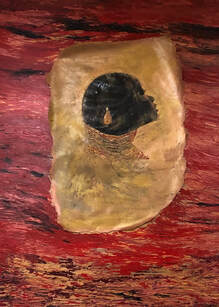 Vision of Hope~ Original Artwork and Quote by Louise Shields​

30 x 40 Mixed Media ~Collage
​
With a vision, there is hope.
With hope, there is action.
With action, there is change.
With change, there is transformation.
​
I Visualize Peace.
The Gilroy Center for the Arts strives to promote unity and inclusiveness by creating cultural Exhibits that inspire, educate, engage and foster a  strong community through the arts. With a deep commitment to honor, respect and celebrate diversity and freedom of expression, the Gilroy Center for the Arts aspires to continue to provide Cultural exhibits like Black History Month. Your donation in any amount is greatly appreciated..
THANK YOU!